“The “New AdWords Experience” is to be rolled out to every advertiser by the end of 2017,” Google trainer Kevin Lao explained to listeners in a recent webinar, “and is intended to make the platform faster and easier to use than the current version.” Mr. Lao must’ve forgot he was talking to advertisers when saying this, because the conspicuous lack of “…with new features!” in that sentence didn’t really instill much confidence in our team. Well, we got our golden ticket the next day when BFW received a beta invite from Google, and now we’re sharing that ticket with you.

Both display and search network campaign creation now feature the performance forecast metrics keyword and display planners next to their ad groups as they are built out with keywords, and expected clicks, CPC, CTR, and cost are dynamically updated with each additional keyword. One can also now create a Display campaign from start to finish within the same page, allowing quick reference to other parts of a campaign while others are being selected. 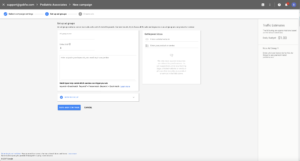 These changes make sense – when you’re creating a campaign, it’s probably a good idea to not build certain parts in a vacuum, and performance forecasts help you be sure that you’ve made the right choices.

What doesn’t make sense is that the new update removed the ability to drill into which keywords are contained in each ad group during search network ad creation. One must now remember the keywords contained within each ad group in order to find the right Headline 1 and Headline 2 material, practically eliminating the usefulness created by the ability to create ads from multiple groups in the same window.

This must be a mistake, since Google has shown that it obviously considers context important in campaign creation due to the display campaign creation changes I just explained. I have a feeling that this is an oversight that will be corrected before the beta is completed.

Google’s answer to the navigational difficulties sometimes posed by the old interface seems to be another work in progress that has added utility in some cases and removed it in others. As you can see, the hotkeys primarily serve as navigation tools (though the addition of a copy and paste shortcut is a no-brainer), and the search bar is only able to take the user to pages rather than serving as a control+F for the entire account.

After eight years, it’s a bit of let-down by the company founded on its mastery of search engine technology. I can see this being useful if one is doing a lot of navigating between pages, but it definitely doesn’t warrant removing the search boxes from every page. Sure, it’ll be faster to get from page to page, but advertisers with large campaigns featuring hundreds or even thousands of keywords will end up having to work around the lack of a search bar for the time being. 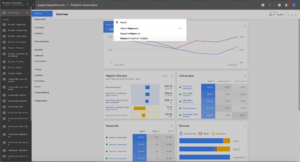 Kevin Lao mentioned that Google would be open to making modifications in the future, but the key words he used were ‘depending on feedback,’ so I would encourage readers out there who want this to be a useful feature to voice their opinions. Right now, I can’t see myself using either too much. Worse still, advertisers with large accounts or those who frequently use the search boxes will be out of luck, since those have been removed to make way for the new search bar.

Improved Interface Navigation and Visualization with the 2017 Interface

Google has done a good job of cutting the fat by moving buttons and navigation items to where they make the most sense. Drafts, experiments, campaign groups, and the other items at the bottom of the grey navigation banner on the left have been moved to a pull-down menu at the top right of the screen, making the left banner for navigation purposes only. Because of this, the account pull-down menu has been done away with, and one can now navigate between accounts and campaigns in the left banner. 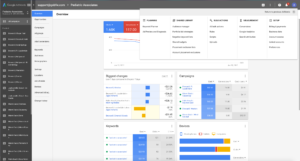 The campaign component tabs like settings, ad groups, etc. have also been given a left banner. If the left side of the screen feels too cluttered at any point, one can press G+W to hide the far-left banner. Further mitigating clutter is the fact that the the buttons controlling the data that appears in each page’s grid, which traditionally occupied the space between the top tabs and the visual have been moved to the right-hand side of the screen just above the grid headers, and the buttons pertaining to the visual have been similarly moved to the right. The result of these changes is a less claustrophobic, easier-to-navigate, more visual interface.

One example of the capability of this structure is the new, highly visual ‘Locations’ tab. The locations tab shows a map that displays the current area that the selected campaign targets, as well as a grid of performance metrics for that selection. For accounts with many campaigns, such as the one I am working with in this article, it is an invaluable inclusion that allows one to seamlessly cross-reference the location data between campaigns (thanks to the left nav) to make sure that no areas are vulnerable from a geographic standpoint. 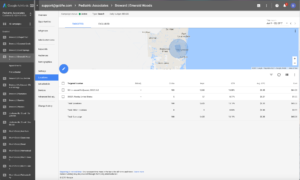 I could go on about some of the smaller changes, like the fact that the ‘Demographics’ and ‘Ad Schedule’ pages have been given their own nav positions, how the charts on all pages can also be expanded to occupy most of the screen, or how one can now preview how a site link will look with an ad while it is being created, but the important things that have yet to be discussed are things that haven’t been released yet (at least not in our beta) – the new Keyword Planner, the new reporting interface, and the ad gallery.