VR in Advertising: Examples & Predictions for the Next Decade

Back in 2017, Ben Lang and I discussed VR in advertising and predicted how it would develop (here is the original article).

I wanted to revisit the industries we talked about in that article to discuss what’s happened since 2017.

I also want to bring in a couple examples that surprised me, and show how VR is a great guerilla marketing tactic for trade shows and social media exposure.

I’ll start with the areas where we’ve seen a lot of progression.

Obsess, Zara, and a few other companies offer AR shopping experiences that are bordering on full VR. Check out the video below and tell me that isn’t cool.

To make these experiences a true substitute for real-world fashion shopping, all these companies need to do is to provide a way to try on clothes in VR: something like the FXMirror below, but that works within the virtual store itself.

Subsequently, VR e-commerce advertising would be as simple as creating a Google Ads shopping campaign. ‘Try this on in VR’ would appear next to the images of clothing that appear for Google searches about apparel. It’s a scenario that I think we’ll be seeing this decade.

By far, the most surprising area of progress has been in healthcare marketing. There were multiple successful VR pharma marketing campaigns in 2019.

I never would have thought that we would be seeing VR as a sales- rep tool this quickly. I don’t think we’ll ever see VR advertising in non-personal promotion, but it’s showing its value as a sales rep tool. It’s a rare instance when pharma marketing is ahead of the game.

About a month after Ben and I spoke, Adidas launched a mountain climbing VR experience: Delicatessen. The experience was named a tough climbing route up the Punta di U Corbu peak in Corsica.

Somehow, two experience climbers carried the Google Jump rig up with them as they went. The result was the VR experience that has been made available at festivals and retail roadshows around the world.

Wisely, Adidas also produced a football VR experience to give something to its soccer fan market. The Adidas Football VR Experience was released at around the same time as the Delicatessen experience.

Users at select locations could don a headset and foot sensors and participate in a virtual match. As gamers took free kicks and penalty kicks, the foot sensor input would make the ball might curve, knuckle, or fly in a high rainbow to sail over the goalie’s head.

The experience would allow users to make video clips of their experiences so that they can share them online.

It was a genius use of VR by Adidas. The company used the novelty of VR to create a social media marketing moment, and it serves as a great example of how companies can use VR as a marketing tool.

The insurance industry has also been a surprising adopter of VR advertising.

Progressive’s Lake Dash VR game was the first attempt to use technology to win leads. 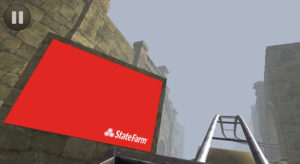 Thanks to Admix for letting us use this image!

Recognizing VR’s viability in the marketing mix, State Farm became the first company to make VR a regular part of its media plan.

In 2018, the company sought to reach a younger demographic, and decided VR advertising was the way to do that. Partnering with the VR advertising network Admix, State Farm ran VR banner ads that ran in select VR games and apps.

State Farm was so pleased with the results that they opted to extend the campaign through 2019. Admix’s Brightroll demand-side platform allowed State Farm to quickly initiate video advertising in VR with pre-formatted units.

And the campaign also benefitted from new engagement metrics specifically created for VR. Admix’s ‘gaze tracking algorithm’ allowed the team to measure how interested users were with the ads. Admix also created a ‘gaze click’ engagement so that viewers can click on the ad simply by either staring at it. As a digital marketer, metrics like these are critical to have. It’s good to see that Admix wasn’t content to stick with impressions and clicks. VR advertising is its own medium, and needs its own set of metrics.

The State Farm campaign reached 500,000 users and generated a click-through rate that was a whopping fifty times higher than a standard mobile CTR. While the engagement rate might be a little inflated (the gaze click was modified afterwards to be less sensitive) they are still impressive metrics.

It’s another example of how VR advertising is already being used in industries that you wouldn’t expect.

Surprisingly, the travel and real estate industries haven’t done a whole lot in the way of VR advertising yet.

Outside of the second two examples, not much true VR material has been put out in travel and real estate.

The reason for the slow rollout of VR advertising in travel and hospitality is that the audience isn’t big enough yet. Only about 11% of US adults own some sort of VR headset. As an advertiser, that’s not a big enough number to stir much excitement.

But it’s coming. The competition between Oculus, Samsung, and Google should produce a cheaper unit sometime in the 2020s. After that, I think we’ll see travel and hospitality companies develop VR advertising at scale. These companies would certainly have a large audience if the next item on my list picks up speed.

There’s been a ton of progress in automotive VR sales and marketing in the past two years.

For starters, there is the work that VR configurator ZeroLight has done for several car companies. They created:

For all their part, these campaigns were pretty limited in scope. But they were in good faith. They enabled users to interact with the vehicle and actually use VR.

The same can’t really be said for Lexus.

Lexus teamed up with the LA agency Team One to create a video series of actors using VR to engage with cars. It was quite a head-scratcher, because you would think that the company’s “Experience Amazing” slogan would be a natural candidate for a VR sales experience.

Lexus has also created the Virtual Drive experience where you can sit in the passenger seat while an NPC driver races you around a racetrack. But rather than controlling the Lexus RC F, you merely sit in it. It’s kind of a half-hearted effort if you ask me.

Audi has led the way in automotive VR advertising and technology. The company reached 1,000 VR-equipped dealerships in 2018, and has seen a 15% increase in optional extra purchases since then.

It has also helped produce a technology that could lead to a mass VR advertising audience.

In 2019, Audi engineers developed a type of VR experience unique to car rides. The “Holoride” experience takes data input from a vehicle’s location, speed, acceleration, and braking and feeds it into the headset in order to create a “motion-synchronized journey” that is more entertaining for backseat passengers.

Nils Wollny left Audi to make Holoride its own company and has plans to make the technology available to as many cars as possible within three years.

With self-driving cars being right around the corner, I think the combination of these two technologies with new VR advertising networks like Admix will result in the first sizeable VR advertising market.

Admix offers display VR banner units within apps. A partnership with Holoride could serve VR billboard inventory to advertisers through a network like Oath would be an attractive opportunity. GPS information from the vehicle could communicate to the ad network through Holoride, and the network could show banner ads of local businesses that align with a user’s interest categories.

Another area where there has been a surprising lack of progress is in sports broadcasting. But it’s not because there is a shortage of companies working on providing VR sporting events. It’s just that companies like Fox and Intel are still working to establish the VR sports broadcasting techniques.

However, there are a couple of factors that suggest that VR sports broadcasting and advertising could soon be a reality.

It might be the farthest off of all the options here, but I could see this system working well for everyone.

It has influenced the opinions of healthcare professionals, convinced 20,000 people to offer their personal information to insurance sales reps, and has even been automated by ad networks.

I think the 2020’s will produce some even more impressive examples, especially if VR adoption increases. If VR ownership comes anywhere close to as common as gaming consoles, I think we’ll start to see VR advertising on a whole new level.

A Quick Crash Course on OTT Advertising for Pharmaceuticals and Healthcare
An Intro to Reddit, a Popular – but Frequently Misunderstood – Social Media Platform
Let’s Talk About Podcasts: Data, ROI, and More
Landing Page Trends and Insights for 2022
Geographic Penetration of TikTok and Other Top Social Media Platforms
By Mark Liska|January 3rd, 2020|