When you really think about it, these ads don’t make any sense.

Ostensibly, split-screen TV advertising was an attempt by networks to improve the user experience. By cutting an ad out of the regular break and playing it during the content, audiences get to see more of the content. The longer period between breaks makes it feel like there are fewer ads.

Everybody wins. Audiences get to see more of the show. Networks show the same amount of advertising while improving the user experience. Advertisers get premium spots that are more likely to be watched.

But it’s hard not to see it as anything less than an attempt to squeeze more dollars out of programming. With split-screen TV advertising, advertisers are charged more because it’s assumed that the audience won’t get up if the content is still running. Networks can pitch these spots as premium and get just a little bit more money from TV advertising.

A weakness of TV advertising has always been that the commercial breaks are a predictable length. It’s easy for audiences to get up and go to the bathroom or get something to eat during the commercials. Split-screen TV advertising is offered as a premium solution to get around this. The ad might be a little shorter, but people won’t miss it if they don’t have a reason to get up for a prolonged break.

That makes sense from a probability-of-viewership standpoint, but it doesn’t make for quality TV advertising.

The strength of TV advertising is that if you have a good ad, the audience will be compelled to watch. If you pull them in, your ad will allow you to drop the audience into a situation they have faced that your product is involved in.

Your product becomes the star of a mini film complete with tension, mise en scene, clever scripts, and your product in action. Americans love movies, and the greatest TV ads have these filmic qualities.

Consider one of the greatest TV ads of all time—the 1984 McIntosh Super Bowl commercial.

That ad gets its strength from pulling the audience in with Ridley Scott’s legendary directing. It builds tension with professional sets, expert cinematography, and clever pacing.

If you were run that ad during as split-screen commercial, it would be a complete waste. The other screen would mitigate the tension that Scott builds up with his establishing shots. The pacing would be thrown off by the cuts that are happening on the other screen. It just wouldn’t work.

If you’re saying “Yeah, well that ad was not designed for a split-screen TV spot, so that point isn’t really relevant.”

Fair enough. Let’s assume that split-screen TV advertising has a different set of rules for what makes a good ad.

Universally, good advertising plays off the strengths of its medium. If there’s one strength of split-screen TV commercials, it’s that the audience’s guard is down. Their content is still running. They’re in an emotional state that is different than when they would encounter an ad during a commercial break. 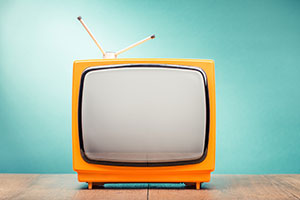 TV advertisers have an opportunity to piggyback on this emotional state. One of the good split-screen TV ads I’ve seen is a Draft Kings ad during a football game. The ad makes good use of pathos—one of Aristotle’s three modes of persuasion—to suggest that audiences complete their experience by putting money on the game.

It’s a bit dirty when you consider how many lives gambling has ruined, but it’s good advertising.

The actors in the ad are smiling, sharing their experiences with others while watching their favorite times, and might even be having a better time than the captive TV audience because they stand to gain even more. So I would say clever use of pathos is even more important in split-screen TV advertising than it is for non-spit-screen TV commercials.

One more comment I want to make before you go, is that split-screen TV advertising is bold. It takes guts to put a voiceover on top of someone’s show. Because of that, it’s wise to put a lot of thought into your script. Since viewers have the chance to watch their content instead, the voiceover becomes more important.

bfw has a lot of experience making national & South Florida TV advertising. I attended advertising and film at the University of Colorado, and more than a few of us have an extensive background in photography. We know what makes a good TV ad because we grew up watching them. We admire our favorite TV commercials and have a healthy distaste for bad ones.

If you need a TV advertising agency in South Florida, look no further. bfw Advertising will make your brand a star! Contact us at 561-962-3330 or leave us a message here to get started!

A Quick Crash Course on OTT Advertising for Pharmaceuticals and Healthcare
An Intro to Reddit, a Popular – but Frequently Misunderstood – Social Media Platform
Let’s Talk About Podcasts: Data, ROI, and More
Landing Page Trends and Insights for 2022
Geographic Penetration of TikTok and Other Top Social Media Platforms
By Mark Liska|December 19th, 2019|