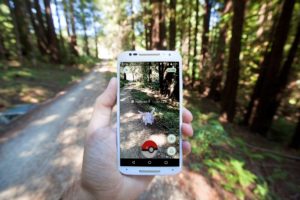 Pokémon Go is a multiplayer game for smartphones that utilizes augmented reality and location-based events. Pokémon are animated fantasy creatures that can be captured and trained by players, called Pokémon Trainers. Through training, individual Pokémon grow and develop special abilities. Trainers then have their Pokémon battle against the captures of other trainers, with each Pokémon having various strengths and weaknesses that add a strategic element to the game. Trainers join teams, so their respective Pokémon groups can earn bragging rights in their communities.

The Pokémon gaming franchise, created by Satoshi Tajiri, started as two video game cartridges for Nintendo’s portable Game Boy gaming system in 1995. Since then, numerous sequels have been released for various Nintendo gaming systems, as well as an Anime series, movies, manga series, and a trading card game. There are now several generations of people around the world with an affinity for Pokémon. 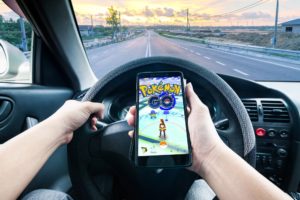 Some people are arguing that Pokemon Go could potentially cause more accidents.

With Pokémon Go, trainers have a real-life landscape for their Pokémon hunting. Despite the success of the product, it has been panned and even vilified by observers. Some are directing deserved criticism at the injudicious use of Google data. Others say Pokémon Go could prompt robberies, accidents, or kidnappings. In response, some feel the safety concerns are overblown and more than made up for by the potential to help people socialize. Many also credit the game for some surprising accomplishments, such as inspiring players to exercise. Entertainment website Ign calls it “the best exercise app out there.”

What is making Pokémon Go such a hit? And, what does it have to do with branding? The appeal of Pokémon Go is not due specifically to augmented reality and mobile technology. There have been plenty of mobile apps that use augmented reality. Some have been successful, but few have been anywhere near a home run like this. Pokémon Go is a phenomenon because it is a clever iteration of a blockbuster brand. When a company patiently develops an enduring brand, both traditional and new tactics garner results. 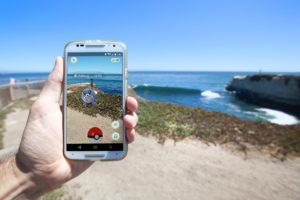 The location-based game offers tremendous opportunities for location-based ads. Advertisers will be charged on a cost-per-visit basis. Let’s imagine a Pokémon Trainer hunting Pokémon in a city park on a warm afternoon. A nearby convenience store franchise has a location-based trigger to serve up a soda beverage promotion, based on the individual trainer’s data profile. Brands will also have opportunity to take advantage of the multiplayer nature of the game by hosting events, such as this baseball park in Durham, NC. Smart brands will tie together the game’s local, social, and data-mining attributes for successful advertising and promotions. One can also imagine brands and locations creating unique storylines involving the characters. This could turn out really well or turn off the audience. Nobody wants to run afoul of outraged Pokémon trainers casting aspersions on your lame storyline.

Building powerful brands takes intelligence, creativity, persistence, patience, and courage. But after earning a dedicated core audience, brands can anticipate much greater results from seizing on new opportunities than less-established brands might. It’s nice to have audiences hunting for your brand.

At bfw advertising, we deliver ideas that help brands grow and seize opportunity. We may be playing Pokémon Go right now, but only because our duties to our lovely clients are complete for the day.

A Quick Crash Course on OTT Advertising for Pharmaceuticals and Healthcare
An Intro to Reddit, a Popular – but Frequently Misunderstood – Social Media Platform
Let’s Talk About Podcasts: Data, ROI, and More
Landing Page Trends and Insights for 2022
Geographic Penetration of TikTok and Other Top Social Media Platforms
By bfw Advertising|July 22nd, 2016|